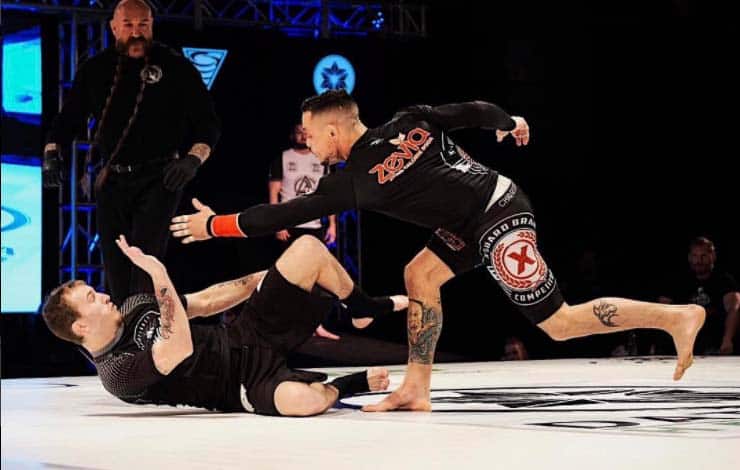 What is Combat Jiu-Jitsu?

Combat Jiu-Jitsu is submission grappling that allows open-handed strikes to opponents once the action hits the ground. Combat jiu-jitsu is pitched as a league of professional grappling. Combat jiu-jitsu adds an added element of danger to grappling matches thanks to the introduction of strikes. But it’s a place where grapplers hone their top-game and ground-and-pound skills. And allows for jiu-jitsu to be applied to a more combat oriented environment without the concern of boxing or kickboxing.

Combat jiu jitsu has a few basic rules which include the following:

Combat Jiu-jitsu is Eddie Bravo’s brainchild. We got an early indication of what he was planning when he dropped hints on the Joe Rogan podcast last year.

Bravo mentioned: “It gets you ready for MMA better than grappling, that’s for sure” “And also there’s a lot of jiu-jitsu guys out there who are awesome that will never do MMA, they don’t want to learn Muay Thai, and this could be their professional sport. This could be the final frontier. I would think 90 percent of jiu-jitsu fans out there would rather see Marcelo Garcia and Xande Ribiero going at it with punches and open palm strikes than just straight grappling.”

The common consensus is that combat jiu-jitsu could place BJJ in a larger spotlight and work to spread jiu-jitsu’s popularity. Combat jiu-jitsu aka CJJ has been pitched by Eddie Bravo as being a bit more attractive than pure BJJ tournaments. It’s going to help prepare jiu-jitsu guys for MMA and potentially evolve the sport.

Combat Jiu-Jitsu made its debut at EBI 11

Combat Jiu-Jitsu got its first official start with 4 fighters, Nick Honstein, Chad George, Sheridan Moran, and JM Holland at a 135 lbs weight class. However, to really draw out bigger names they will have to put up purses and they aren’t quite in a position to do that yet. These fights got huge praise from the crowd and built up quite a bit of fan support. These fights seemed to be much more exciting with the crowd reacting every time a strike landed.

The introduction of palm strikes and no point system really gave the tournament a more realistic and exciting feel. With open palm strikes being allowed in these matches, it gives it a more real-world feel, and it helps you visualize these competitors fighting in a more street fight environment.

The Eddie Bravo Invitational (EBI) is a 16-man tournament that features submission-only grappling. For EBI 11 combat jiu-jitsu was introduced. The EBI tournament features a $20,000 take home prize and is designed or the fans.

Some People are Taking Combat Jiu-Jitsu To Another Level

The Future of Combat Jiu Jitsu

The future of this new sport is still kind of up in the air. Eddie Bravo still has a bit of work to do to put the final touches on this sport. There’s a few new rules that have to be tweaked and really finalized, but there’s definitely a huge amount of potential for the sport.

Just recently there was the Combat Jiu Jitsu Worlds The Featherweights 2020 which had a good amount of hype surrounding it. This begs to ask the question of when the next CJJ event will be taking place! Eddie Bravo seems to be trying to balance his new passion in CJJ and bringing back the traditional Eddie Bravo Invitation as well.

No Gi vs. Gi Jiu-Jitsu
Best Stretches for Jiu-Jitsu